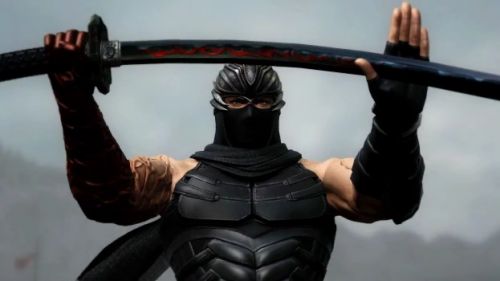 One of gaming's most punishing franchises returns to consoles next week.  Ninja Gaiden 3 will continue the tradition of being painfully difficult.  I remember my time with 2004's Ninja Gaiden remake on the original Xbox.  I tapped out around the third stage.  I think I was fighting on a blimp, or something.  I just remember hating every enemy, including the scrubs.  Since then the series has become more accessible.  You can always increase the difficulty if you're a masochist.

This launch trailer is all about pain.  It seems that Ryu Hayabusa is suffering from some sort of psychological turmoil.  I guess carving up people for a living may have some adverse mental affects.  While the trailer doesn't show any co-op play, the product information states that it's in there, most likely taking the form of separate missions.  Oh, and there's a dinosaur.  Because, you know, they're awesome.

Ninja Gaiden 3 will be out on March 20th for the Xbox 360 and PlayStation 3.  It support two player online co-op.