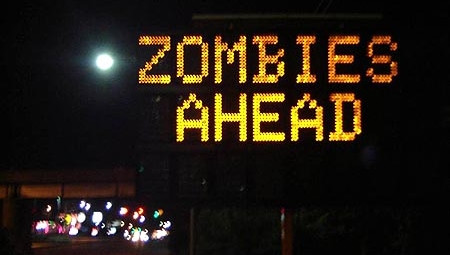 If there is any one thing this site is familiar with, it’s the challenge of coordinating two or more people to play together. That is, after all, the focus. Sometimes even careful planning can go astray when time zones get in the way. This week in co-op Kat and Sam discover just how interesting, and worth while a cross continental exchange can be.

The older I get the less the concept of Time impresses me. As a kid the weekend would seem like a life time and the summer holidays would be some sort of hot expanse that went on for a delicious eternity. Now it seems like my birthdays are rattling along at such a pace that sometimes I think I am stuck in a movie montage depicting the concept of rapid aging. Despite my disregard for the power of Time I was to learn a harsh lesson when trying to organise a game of Zombie Apocalypse, with ShadokatRegn (Katrina) who is seven hours behind.

What is seven hours? When Katrina is having tea, I was likely to be in bed. When I was waking up for breakfast, Katrina would be sound asleep. We were like two ships passing in the night, but with fewer foghorns (and more cowbell?). However, one night the stars did align, and although this did denote the 5th sign of the apocalypse, we were able to get some gaming in before the world imploded.

As a Brit (I find it hard to consider myself a European although Americans seem to think I am), I do play with my Atlantic bound cousins on occasion. Usually they come in the form of a 12 year old boy shouting abuse over the mic during an intense session of Viva Piñata: Trouble in Paradise. What Co-Optimus does brilliantly is bring together like minded co-op friends like Katrina and I. Although we had never met it did not take long for us to fall into an easy playing style.

As a game Zombie Apocalypse is best played with as many of the four players as possible; so when my UK pal joined in we were able to really punish the undead hordes. Zombie Apocalypse is a Smash TV for the Left 4 Dead generation. A sea of corpulent corpses traipse a contained map with eating your brains in mind. The action is intense and as the game difficulty increases the need for co-operation increases. There is nothing like an intense firefight to bring strangers together.

What I liked about my recent gaming session of Zombie Apocalypse was not only the game, but meeting new friends. Co-Optimus is all about relaxed co-op gaming with like minded people. It was clear to me that although we live hundreds of miles apart and I am a man 7 hours in the future (fear not the world is still safe) we had plenty in common when it came to gaming and life in general. I would gladly face the Zombie Apocalypse with Katrina at my side (if only because the lag she suffers from will allow me to escape whilst she’s occupied : ). Once fellow Co-optimus staffer Samoza and I finally crossed paths after a few near-misses (he is in the future, after all), a wedding, and a national holiday, the sparks only took a minute to really start flying. We booted up a game of Zombie Apocalypse which I had picked up with a recent sale but not played just yet - and it showed. I did fairly poorly for the first bit of time, with little conversation going between us.

Sometime in the midst of all the Zombie Apocalypse mayhem, another British Co-optimus member joined up - I was overcome by two different, yet similar European accents. Having three of us, myself, Zonf, and Samoza, made the gameplay even more interesting. We spent some time getting to know one-another, since this was really the first time we had a close encounter of the co-op kind.

Then suddenly, the co-op set in. We were almost moving and killing the horde in sync, and the discussion showed it. Being in a zombie survival world, we just had to have the obligatory “what is your favorite zombie film?” and “Which do you prefer, slow old zombies, or the fast rage zombies?” conversations.

International gaming does have its drawback though, especially when it’s two Brits vs. one American. I experienced quite a harsh amount of lag, and died a lot for it. To be honest, it was half-expected, somewhat frustrating, as well as amusing. I’d be doing just fine holding off waves of undead with my machine-gun, then suddenly on the ground with no life, a few zombies teleporting around the screen. Yea, those would be the most terrifying zombies. Not running, not lurking, but teleporting zombies.