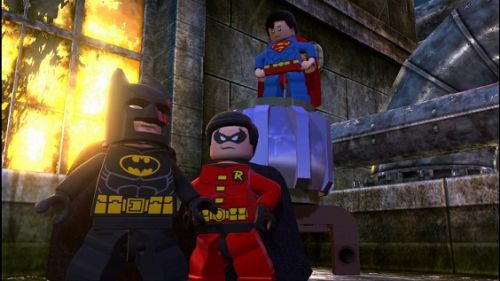 Last time you joined us LEGO Batman 2: DC Super Heroes was in great peril.  The game had just been announced and suddenly the Riddler had sprung a trap and all news of the game was hidden.  Bang!  Biff!  Bonk!  In today's thrilling news item, Batman and Robin have escaped bringing with them all new screens for the game and a trailer - holy smoking public relations Batman!

LEGO Batman 2  offers more members of the DC posse to aid Batman; including Superman, Wonder Women and The Green Lantern.  The first look trailer shows off many of the returning enemies from the first game including The Joker and Bane, but also Superman.  He's not an enemy of course, but Batman's ally.  Superman has super heat/laser vision which is sure to come in handy when solving puzzles that befuddle the Bat.

There are a couple of differences with Batman 2 over the majority of other games in the LEGO universe.  Firstly, Gotham City will be an open world environment and secondly, the cast will be fully voice acted.  No more mute comedy from the LEGO characters - will this take away some of the charm of the game?

As always TT Games have made no announcement about whether the game will be online co-op, but isn't it about time it was?  Local or online, playing as LEGO versions of DC heroes and villains will be great fun, check out the trailer if you don't believe me.