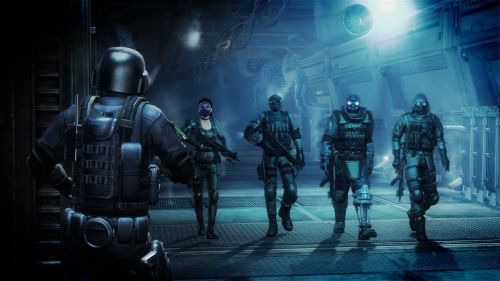 This week we have two team-based co-op games launching; one featuring mechs, the other featuring zombies.  Another game centers on ninjas.  I'll let you guess which one.  Mechs, zombies, and ninjas?  All we need now are some aliens and we'll have the quadrilateral base of the perfect gaming Pyramid of Villainy.  Cap it all off with some Nazis and we'll have ourselves a party! (Nazis always cap the pyramid.  Always.)

Armored Core V (PS3,360)  Speedy, highly customizable mechs destroy each other with  ridiculous weaponry in this squad shooter.  I played the Japanese demo, which allowed me to confirm two things, A: mechs are still badass, and B: I still don't know Japanese. 5 player online co-op

Kinect Rush: A Disney•Pixar Adventure (360) One of this week's releases is not like the others.  This game features neither mechs, ninjas, or zombies.  It does use characters from Pixar's The Incredible, Toy Story, Cars, Ratatouille, and Up.  If I was 10, I'd be wetting my pants over this one. 2 player local co-op

Ninja Gaiden 3 (360,PS3) Ryu Hayabusa returns for the third installment in the hardcore action franchise.  This game promises to probe the psychological scarring that can come from shredding people like lettuce for a living.  2 player online co-op

And here we have this week's retail releases, fresh with Amazon links for your purchasing pleasure.  If we missed something, please let us know!