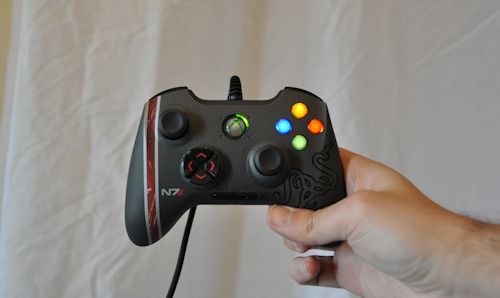 As soon as I saw the Razer Onza with the Mass Effect 3 branding, I knew I had to have it. The design of the Xbox 360 and PC controller is an instant stand out and even if you aren’t a fan of Mass Effect, the device is pure gadgetry sexiness. But what exactly is it? It’s a wired controller built for serious gamers who like to tweak and get the most out of their controller. There’s two big ways The Razer Onza Tournament Edition achieves this.

The first way, and my favorite option, is the adjustable resistance on the analog sticks. Twist the stick left or right and you can increase or decrease the tension. So if you prefer the floaty, more loose feel of a PlayStation 3 analog stick, you can almost achieve that with the Razer Onza. If you’d rather a stiffer tension for more precise aiming for shooters, you can do that too. It’s all done on the fly with a few quick clicks.

The second way to tweak this controller is through the two extra, programmable buttons. Doing this you can add a 2nd set of bumper buttons that can be remapped to anything on the controller. This means that games that don’t offer any controller configuration, well, you showed them didn’t you!

Overall the controller has a really solid feel to it. It is a wired controller with a 15’ braided cable. While that’s definitely long enough, it may be too long as I found it getting in the way at times. The back-lit face buttons have this nice clicky feel to it, making the Onza almost have an arcade controller like quality.  The D-Pad uses four split buttons for precise presses, and seemed to work well enough in Street Fighter X Tekken.  Finally the main triggers are curved, making it comfortable to grip in a variety of ways.

With a price of $59.99 the Onza Tournament Edition isn’t the cheapest controller on the market, but when you hold it, you can feel it’s a quality piece of hardware that will stand up to a lot of abuse.

The Razer Onza Tournament Edition was supplied by Razer for evaluation purposes.  The controller was used for a variety of games over a week period.