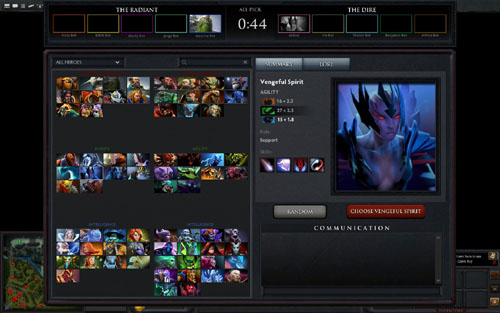 For the past several weeks, I’ve been dabbling in Dota 2. It’s one of those RTS/action games where you take control of a hero unit and defend your base from the opposing team. Though the focus of these games is usually competitive, Dota 2 supports a pretty good co-op mode (probably the best I’ve seen for the genre). Any number of players can form up on a team, fill up the remaining slots with bots, and go up against an all-bot team in good, old-fashioned comp-stomp. The bots are available in five different difficulty levels, so it’s easy to tweak the experience based on whether the players are new to the game or experienced. Of late, I’ve found the co-op mode a great way to blow off some steam.

Lots of times I end up trying something new in the co-op (whether it’s intentional or not!). In the last game I played, I was playing with two friends and two bots on my team. Looking at our team comp, I saw we needed a support character. Since this is the role I’m best at, I locked in Vengeful Spirit and appeared at my team’s fountain. Like normal, I happily purchased my starter items (all based on support and defense, including wards which are just for giving my team vision of the map).

I started to head down to ward up the river, when I hear one of my teammates say: “Tally, go mid. Go carry Veng.” I hit S to stop my character. Oh, no. My character can fit the “carry” role (one of the main damagers on the team who’s expected to get most of the kills and a ton of gold and items), but I’ve never played her as one. Not only that, but my starter items are terrible for this role. I would’ve picked way different items if I’d known I wasn’t going to be supporting. My teammates are already settled into their lanes. It’s too late to switch. Chin up, I ward up the river and head to mid lane. My opponent is Bane Bot. Like a jerk, he’s all over denying my creep kills (most of the time when my auto-attack missiles are in the air, about to score the kill). I manage to get a handful of kills, slowly racking up gold. With my lane pushed, I head to bottom lane to try to gank the bots down there. My two bot teammates down there cheerfully ignore my presence in the woods, and keep pushing their lane. After about 30 seconds of waiting for an opportunity or for them to initiate, it becomes clear that this isn’t going to happen. Well, this has been a waste of time for me. I head back to mid where Bane Bot has accrued at least three times the creep kills as me. This isn’t good... annnnd I just gave up first blood. This is going awesome.

I respawn, buy up my items and head back to lane. I get some more creep kills and gold in lane, but I’m way behind due to my wasted time in bottom lane and death in mid lane. My top lane team member calls for my assistance, so even though all I want to do is farm, I head up there. Despite some good teamwork between us (pulls and speed boosts from him and stuns and armor debuffs from me), we aren’t able to secure any bot kills. And I end up dying. Again. This kind of sets the stage for the rest of the game.

Despite my absolutely abysmal performance, we still had fun and communicated well to pull off some decent team fights. My Dark Seer buddy managed to round up some post-mortem kills against the bots several times with his illusion wall (the bots still don’t know how to react very well to that skill). In some ways, a co-op game that’s going badly is more fun from a co-op standpoint than a game that’s going super well. When your team can just roll over the bot team, communication and coordination often isn’t as important. Together my teammates and I set up our positionings and planned out initiations, and together we raged at our bot teammates for running off while we were team-fighting or just standing in the back watching us die. It was a bonding and learning experience for us all. My take-away from it? I need much more practice playing Vengeful Spirit as a carry! And I need to know that I’m going to be doing it!