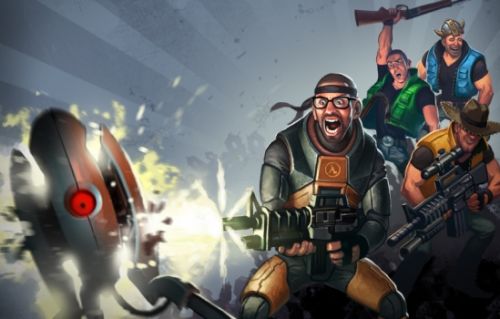 Shoot Many Robots has finally received a PC release date, and it's sooner than we expected. The four player side-scrolling shooter will launch on Steam on April 6th. That's next week, for those of you who aren't sitting in front of a calendar. The PC version is also getting some sweet pre-order bonuses.

If you pre-order Shoot Many Robots you'll earn access to a few kick-ass Valve-related items, including Gordon Freeman's suit and glasses, which cause Portal turrets to replace some of the enemy bots.  There's also a Chopper Bot-themed backpack for the Pyro and Medic Classes from Team Fortress 2. Check out the other improvements coming to the PC version after the break. Shoot Many Robots features "optimized PC controls" and better graphics than its console counterparts. It will also be available as a Steam 4-Pack, where if you buy three copies you'll get the fourth one free. It will also feature other standard Steam options, including achievements and matchmaking, Facebook matchmaking, and voice chat. We really enjoyed SMR, giving it a 5 out of 5 in our Co-Op Review. This game is a steal at $9.99. I've made it to the level 50 cap and I'm still having a blast with the game.