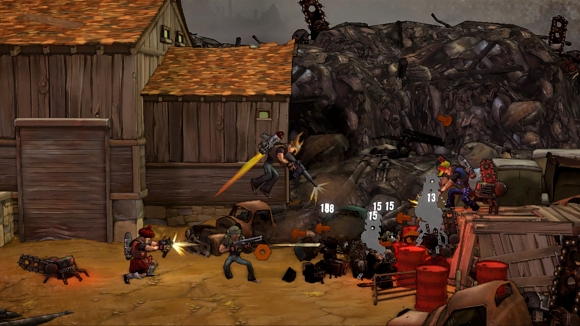 The robot-run AI Apocalypse we imagined probably didn’t look much like Shoot Many Robots, but perhaps that’s a good thing. It’s so different, in fact - you’ll get to decide who the enemy is. There is an online contest being hosted by Shoot Many Robots developer Demiurge Studios called “Design Many Robots” that puts you in the designers street.

The online contest, dubbed ‘Design Many Robots,’ asks creators to design their own vision of mechanical terror to be shot full of lead in the upcoming project, vying for a chance to have their robot appear in the first expansion pack for Shoot Many Robots when it launches in 2011. Winners of the contest will also be given the chance to be flown to the Boston area to visit Demiurge Studios in person and watch their own robot creation come to life within the game.

Unfamiliar with what Shoot Many Robots really is? It’s a 4 player co-op “run and gun” game, complete with many robots to shoot. Perhaps this contest trailer will help explain things about the game, and the robot designing contest a lot better.