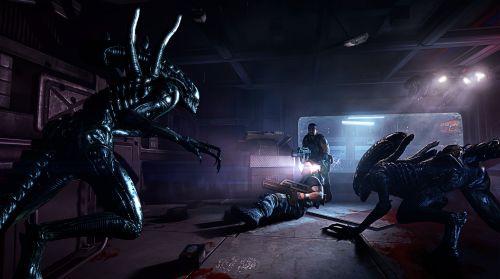 New screenshots and several previews have hit the web for Aliens: Colonial Marines.  The screens all look incredibly good, with the details on both characters and envioronments standing out.  Obviously with this being an Aliens game, atmosphere is key, and it looks like Gearbox nailed it.

Most of the previews seem to focus on the game's multiplayer versus mode, which is said to feel a bit like Left 4 Dead's versus.  The good news is, playing this mode enhances and counts towards your co-op game.

Additionally, there is a progression system in the multiplayer that carries over to the co-op game, with weapon attachments to unlock and ranks to acquire. Perform well with the pulse rifle, and you might be rewarded with a flamethrower attachment, or an underslung grenade launcher. It’s an experience that has clearly been influenced by games like Call of Duty, but it’s a welcome addition here, and gives you a reason to keep diving back into it.

Aliens: Colonial Marines will be out later this year on the Xbox 360, PlayStation 3, PC and upcoming Wii-U.  It'll feature four player co-op through the campaign and possibly a survival co-op mode.  Aliens: Colonial Marines supports both split-screen and online co-op.  We hope to get some more details of the game at PAX East this weekend.