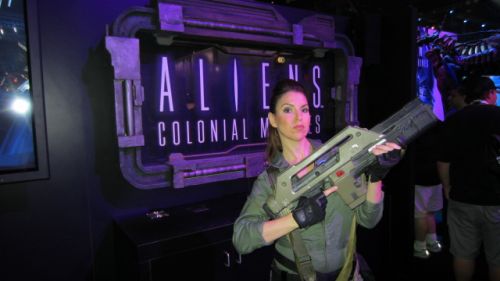 In an E3 live chat Gearbox producer Brian Burleson let it slip that players will not be able to play as female Marines in Aliens: Colonial Marines. This came as a shock to fans of the series. Strong female characters are a hallmark of the Alien franchise. For Gearbox to not feature a female lead is more than a mere oversight, it's a tragedy.

It seems that several sites have had a different take on Burleson's answer to a particular question concerning player choices. I've read articles that claim playable females have been totally scrapped from the game, and I've also seen outlets report that women will only be absent from the multiplayer modes. I dug up the Origin Live Chat to have myself a listen. As usual, I was left a little confused. The question comes at 28:25.

This video has a nice loop of multiplayer action and a lot of great information. Don't simply skip to the end.

If you heard what I heard (and my hearing is shot, by the way), someone named "Vasquez" (rad) asked Burleson "Will there be the choice to play as a female marine?" There was no indication of whether or not they were talking about the multiplayer or the regular campaign. Burleson responded "No, sorry no..." (some pleading from the interviewer, can't say I blame him) "No, actually, no..." (Really..?) "Oh, yeah. Vasquez was one of my favorite characters..." (grumbled acceptance from the interviewer) "There's actually lots of girls in the game. It's not just all guys running around."

What the heck does that even mean? To the Speculation-A-Tron 5000!

Throughout the whole interview, Burleson and the interviewer discuss several aspects of the game. Everything from the HUD, to the weapons, to the cooperative campaign, to team deathmatch. Judging by Burleson's answer, one could deduce that female characters will not be playable in the game at all. But most of the questions focused on the multiplayer, so Burleson could have simply meant that particular mode would not have female characters, which he tried to rectify by mentioning "lots of girls in the game." No matter what the meaning, it got someone's attention.

An iPetition to "Include Playable Females in Aliens: Colonial Marines Multiplayer!" was started a few weeks ago. It has already received over 3000 signatures. That's not a huge number, but it's something that a decent amount of people (about 3323, or so) want. The petition is basically asking for a customizable female character in multiplayer:

What we want is the ability to create a CUSTOM female to represent ourselves just like the men can, in Multiplayer/Co-op in order for us to "Become a Colonial Marine" as well as accurately represent the other half of the United States Colonial Marine Corps!

I'm sure most of you know this is no small task, since animations, voices, and pretty much everything that goes into creating a playable character is different when creating males and females. But still, it's frick'n Aliens. The movie was full of badass men and women. A:CM  should carry the torch.

All hope is not lost. I was going over some of the media for the game and it seems likely that at least one woman will be playable in the campaign. We don't know much about the story, but we've seen the box art, and the character second from the left looks awfully feminine: Dudes just don't wear hip-huggers that often. At least, not in public -and not while armed.

Of course, she may not be playable. She may just be there as window dressing, but I doubt it. She also appears in the promo graphic from Sega's Aliens: Colonial Marines page. Below she can be seen depicting "Additional Marine Customization."

1. She's the one who looks like a woman. 2. She's sleeveless and her arms are NOT as big as a human head.

A little clarification from Gearbox would be nice. The petition has been out for over a month and they've kept mum on the situation. They're probably busy with Borderlands 2, so I'll forgive them. For now.

Preorder editions will include a code to unlock four male characters (Hudson, Apone, Hicks, and Drake) in the multiplayer modes. It would be nice if we could get Ripley, Vasquez, Dietrich, and Ferro.  But not Annalee Call. Never Annalee Call.

As I was tidying up this post (sorry for the length) I noticed a ray of hope through Twitter from Mikey Neumann, one of the lead writers for Gearbox and creative lead for A:CM. It looks like the standard PR voodoo is in full effect. Seems there's a lot more to the female side of the story, but Gearbox employees are remaining intentionally vague. A few of Neumann's tweets offer some clues:

@heathercampbell We all absolutely understand that within the franchise female Marines are paramount. This is part of the game

Speaking from a story perspective, the heart of the story in the game is a character named Bella. A female, and the best I've ever written.

I did what comes naturally and asked him an easily dodgeable question via Twitter, like a chump: "Is Bella the character from the box art? Or is that still hush-hush?"

Damn. These guys are tricky. It's like talking to my wife.

As a huge Aliens fan, I think we should be able to play as female Colonial Marines, so I'll sign the petition. Some people say that online petitions don't solve anything, but they sure seemed to help the Dark Souls community bging the game to PC. (They also hit 100,000 signatures.)

Anyway, that's my opinion on the topic. What's yours?

I'll leave you with one of the greatest mother bear images in all of science fiction, shoot maybe in all of cinema: I don't care who or what you are. You don't mess with that.