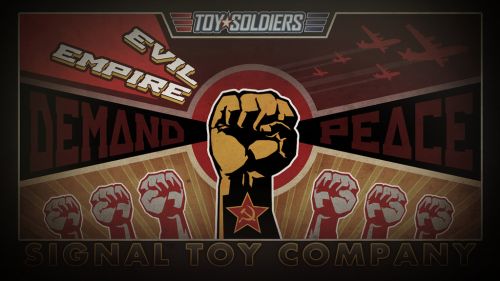 My fellow comrades! Today I bring you a game trailer of nuclear proportions (Err... maybe not quite that big)! Signal Studios’ upcoming Toy Soldiers: Cold War DLC, “Evil Empire”, will bring us the next stage in the World War of “children’s play things”.

In the previous installments of Toy Soldiers, we’ve had the chance to dive into many different wars that have a;; shaped the way the world resides today, just on a much smaller scale. The difference between this game and those, however, is that we’ve never got to play as the people that beat us into outer space. Yes, soon "Evil Empire" will pit us against our own USA, allowing us to finally play as the Red Army bent on being the dominant nation in the toy world.

Like the Russian anthem? If so, then you’ll like what the "Evil Empire" DLC will add your Toy Soldier’s library of playable options even more:

Not only that, it will also include a brand new mini-game named "Pop-A-Pig", which is basically a more “Red” version of "Whack-A-Mole". You’ll be able to take control of a gun turret, and the objective is to shoot out all the “capitalist pigs” for points and the time clocks for gaining extra shooting time, but avoiding the innocent (and practically a staple in every video game involving Mother Russia) Matryoshka “Nesting” dolls for a high score. Signal Studios has yet to announce an official release date for "Evil Empire", but we believe that since this trailer has been released recently, the actual game should be sure to follow it very soon.

(Okay, you can speak normally now.)