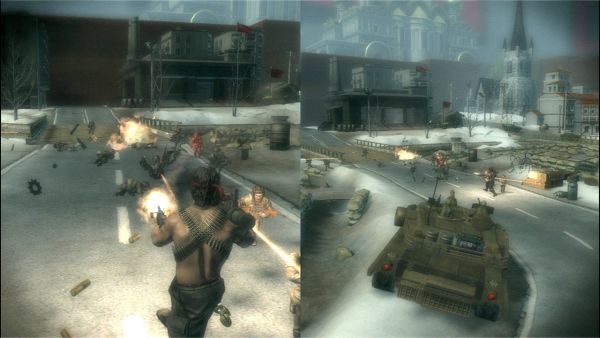 Rambo doesn't need a tank as back up

Edwin Starr asked "War (huh), what is it good for?"  According to the 500,000+ copies of Toy Soldiers sold on XBLA, the answer is that war makes for popular games.  The original Toy Soldiers was a very entertaining title that mixed tower defense gameplay with third person shooting.  However, it lacked something essential in war (and games), co-op!  This is being remedied with Signal Studios follow up, Toy Soldiers: Cold War, which has offline and online co-op throughout the campaign and co-op survival modes.

The action shifts from the World War setting of the first game to the 80s era of the Cold War.  A time of rippling muscles, phones the size of house bricks and fashion that has been wiped from the memory.  This later setting means that all the weapons and vehicles have been modernized from the fleshiest of men, to the most formidable of gun ships.  Toy Soldiers: Cold War will allow players to take on the role of both the Americans and the Russians and blast away in either side's 80s super tanks.

Gameplay has also been tweaked with Signal Studios making a special mention of their enhanced AI.  The improved enemy wave system should allow for greater replay value as the game becomes less predictable.  Tweaks have also been made to vehicle physics and destructible environments.  As a Microsoft published title, the game is likely to be an XBLA exclusive, so PSN players will have to make do with their Rambo box sets to get their Cold War kicks.

Toy Soldiers: Cold War will be available to test manoeuvre during the upcoming PAX East.  Co-Optimus will again be represented at the event this year and will be sure to preview all the upcoming co-op games coming your way, including this one.  In the meantime feed your love of 80s action with the first trailer for the game and an action packed gallery.