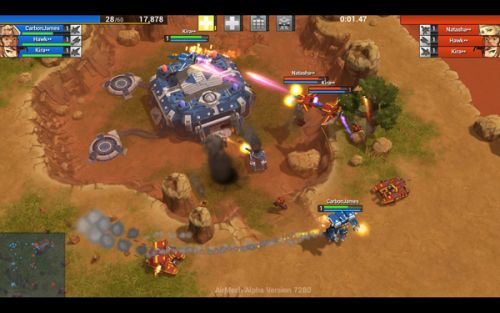 Indie developer Carbon Games were showing off the latest version of their RTS/MOBA hybrid called AirMech at PAX East 2012 and I chatted with a member of the developer about the game.  The idea of it is a hybrid of the genres, players won't be building any bases like traditional RTS games, but they will have a variety of structures to manage units from.  And unlike most MOBA games (think League of Legends) - players have more direct control over the other units on the battlefield.

The core of the game is your AirMech.  This transforming robot goes from badass mech to flying super jet with a key press.  While in jet mode you can quickly exit battle, manage and heal your troops, and survey the battlefield.  In Mech mode you'll be dealing damage directly to enemy units.  There's a good variety of units to purchase during gameplay including ground, defense and infantry style units.  The look of the game is incredibly eye catching with cartoonish style graphics that pop off the screen mixed with a futurstic tech style.

The game is currently in alpha testing on the Google Chrome browser to over 50,000 users.  There's also a PC version planned, with likelyhood of landing on Steam, this summer.  The game has actually been in development for over two years now and is the brainchild of Fat Princess developer James Green. The game is completely free to play, as the future PC version will be too.  Instead the influx of money will come from customizing your air mech and a variety of other cosmetic features.

So what about co-op?  We were told there three vs three battles are definitely tuned to allow a comp stomp mode with any variety of one, two, or three players taking on the AI.  The basic goal of the game is to capture strategic points and eventually overrun the enemies base.

You can try out AirMech now and when the PC version is released all of your information will be carried over.  The goal of the team is to have one universal account that lets you access your characters from anywhere - whether that's PC, web or even...possibly...mobile.