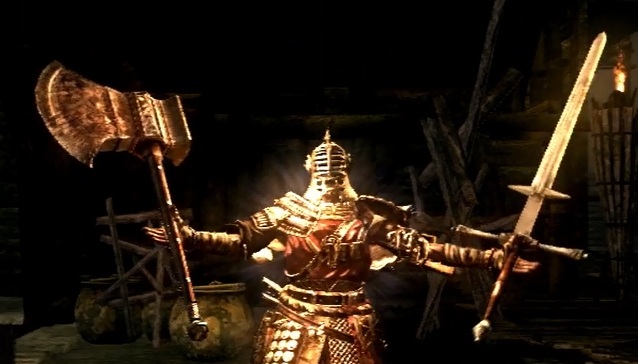 The PC version of Dark Souls will be called the "Prepare to Die Edition." If we're to believe PC Action magazine, (and there's no reason we shouldn't) there will also be "new bosses." If these new bosses are not available as some form of DLC for the console version, I will be forced to buy myself an adequate PC. Maybe the Tourettes-inducing frame rates in Blighttown and the New Londo Ruins will finally make it into the double digits.

Of course, this will open up the notoriously difficult game to PC gamers, players who have been known to "alter" games to their liking. The possibility for a better co-op experience is definitely there, as well as the chance that some numbskull removes the level restrictions, allowing high level players to decimate newcomers through hostile invasions.  C'est la vie.

Publisher Namco Bandai has yet to make an official statement. That damn wall on Facebook is still standing, hiding an upcoming announcement. I expect it will announce the PC version, or maybe we'll finally get more details on the rumored Dark Forest DLC. I sure hope it isn't some patch adding Kinect and Move support... Preparing to zoom and enhance. Dark Souls is available now for the Xbox 360 and PlayStation 3. We expect it to arrive on the PC in August. I hope it is not a hacked up, unplayable PvP mess by September. Don't let me down, PC gamers! It supports three player online co-op. It's also better than whatever game you're currently playing.