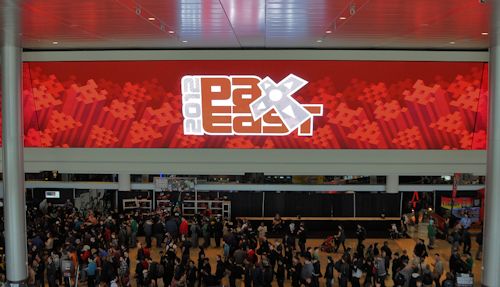 PAX East 2012 has come and gone.  This year was an interesting year for me as I not only tried to cover the numerous co-op games during the show, but show off a co-op game of my own.  Thankfully as Tally had said in her Raiderz preview, it was the year of the Free to Play.  Free to play MMOs, RTS, MOBA, FPS, and any other achronym you can think of were on display.  Huge booths from Firefall, World of Tanks, Terra, and League of Legends dominated a show floor.  Their only competition were Ubisoft and 2K Games, which sat side by side competing with Farcry 3, Ghost Recon and Borderlands 2.

Overall I just couldn't help but be completely underwhelmed by that.  That being said there we gems on the show floor, mostly at the indie booths - several of which were completely packed full of people almost consistently.

Personal highlights for me were finally getting to meet Chris Park of Arcen games face to face as he showed off A Valley Without Wind.  It was also great to meet several community members from the site who were just generally awesome people all around.  Those dancing Clap-Traps in the gallery?  One of them is community member beebadarko!

We'll be continuing our write-ups from the show over the next day or so, but for now you can enjoy some pictures of the show floor and some other unique things we saw; like the awesome Borderlands 2 statue or a real flying car!