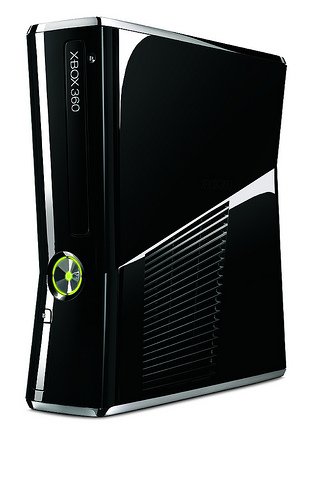 E3 is in full swing, and Microsoft's presentation just wrapped up.  Most of the focus was on Project Natal, now known as Kinect.  But at the end of the presentation, a longstanding rumor was officially confirmed: a new Xbox 360 is here.  Shipping to stores today, the new Xbox 360 is sleek, shiny, and dare we say sexy.  Abandoning the matte-finish curves of the first model, the new version is angular and glossy black.

Besides the cosmetic changes, there's a lot of new stuff under the hood.  The best new addition is built-in wi-fi-N.  No more wireless networking adapters needed!  The unit is also smaller, quieter, and has a 250 gig hard drive.  And it's all for the same price, so we'd expect some nice clearance deals on older models soon.  We'll have more E3 coverage for you soon; in the meantime, what do you think of the new Xbox 360?

Updated: Is that an optical audio out I see on the back?  If so, that's a nice upgrade as well, as you needed a special cable from Microsoft to get 5.1 before (unless I am mistaken).