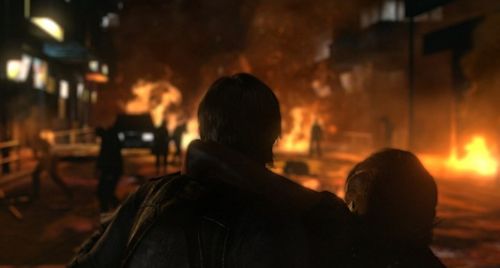 Capcom held their annual Captivate event last week in Rome, Italy.  The press and community event invites various outlets to check out upcoming Capcom games and witness announcements in exotic environments.  Among those games on display were Resident Evil 6,  a co-op game we knew very few details about.

Our friends over at Polygon have got all the details we could want.  The biggest revelaiton is the intertwining of three separate story lines across the game's campaign.  Each story line focuses on a character; Leon Kennedy, Chris Redfield, or newcomer Jake Muller.   And for the first time in the series' history Leon and Chris will cross paths and maybe...maybe...even cooperate.

Players will have a choice of three protagonists in RE 6. Each has a unique storyline, a partner who helps them in their adventure (and who can be played by an online or offline co-op partner, or left to the game's AI) and their own individual graphical HUD. The three main stories can be played in any order.

Good news for co-op players as the game features drop-in and drop-out play without the need for the awkward check pointing issues that Resident Evil 5 had.  Several changes have been implemented for controls, camera, and HUD display making the game a much tighter experience.

The style of game is returning more towards the series' horror roots, with the return of zombies among a slower paced and darker atmosphere.  The release date for the game has been moved up from a November release to an October 2nd release - which may be a good sign for the state of the game.

No details were given about the game's rumored other co-op modes, but we're told Capcom will be revealing a ton of details at E3 2012 - and Co-Optimus will be there.