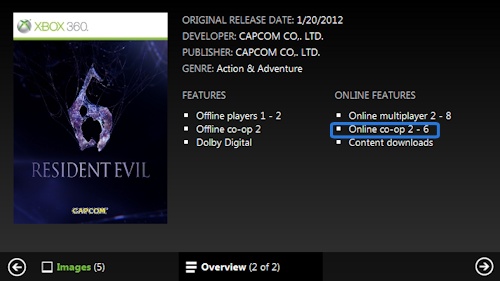 An Xbox.com listing for Resident Evil 6 suggests the game will feature a six player online co-op mode.  Whether this mode is the campaign or something extra remains to be seen.  Listings on Xbox.com do come direct from a publisher submitted form, so this reveal would suggest the feature is more or less official.

Speculation would put a six player online co-op mode as an extension of the popular Mercenaries mode which was found in Resident Evil 5 as well as some of the portable titles.  This mode is survival based gameplay mixed with arcade high scores.  With another Resident Evil game coming this year as well with online co-op, though the focus is a bit different, it looks like fans of the franchise and cooperative gaming are going to be set for a while.

As soon as we know more about Resident Evil 6's co-op details, we'll update our database as always.  RE6 is set to be released this November on the 360, PS3 and PC.