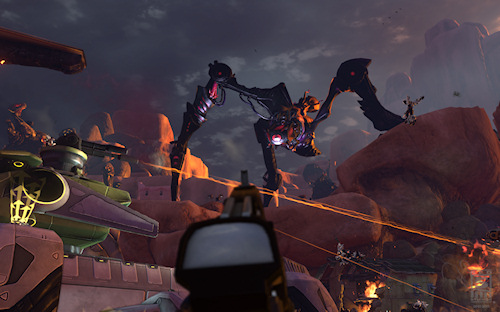 After what seems like a half dozen video game conferences, I finally got to get my hands on Firefall's PvE experience - instead of the versus gameplay that was always on display at previous events.  The good news is, despite the game being in closed beta for months and months, it appears the free to play game should hit a more open beta in the coming weeks.

My mission started with a fly over of a small area, giving me a good view of the jungle like world that was below me.  I was clearly able to see dynamic battles taking place as the drop ship brought me into the first town.  Immediately I was told to sync up with a SIN terminal, these terminals reveal areas of the map and allow you to see what dynamic events are currently taking place.  These terminals, and towns, can be taken over by the game's primary enemy force - a group known as The Chosen.  If the player population loses a town, they'll lose access to its resources, shops, and other bonuses.

During my demo the point that was driven home over and over again was that this sort of dynamic content is what drives Firefall's co-op experience.  If a town gets taken over, then a new mission becomes available to players to retake the town or SIN outpost.  Players can team up with up to five players in a squad and attempt to retake the resource, making it once again available for everyone.  This is all governed by a system called GAIA - which is a bit like the AI Director from the Left 4 Dead games. But these aren't the only missions.  The first few basic missions I played felt like those in a traditional MMO - like killing 20 of a certain kind of enemy.  Another mission had me defending a water pipe from waves of enemies.

Firefall's gameplay itself felt incredibly solid, with the ability to switch between 3rd person or first person.  There's a heavy focus on the vertical freedom provided by each character's jump jets making movement through the world feel like traversing a more nature oriented Crackdown.  A lot of the player's skills rely on this attention to your height - for instance - the one ground slam attack dealt more damage the higher you were.

Beyond these standard missions which are playable in co-op, you can team up for what was shown to me as a "Thumper" mission.  Thumpers are these giant mining drills that player's call in from space.  As they dig for minerals they let out a loud thump against the ground, thereby attracting enemies.  It's the players jobs then to defend the thumper as long as possible against waves of enemies in what becomes a bit of a survival mission. All in all Firefall stands out amongst a crowded market of free to play games by offering a few different experiences.  It carefully blends MMORPG elements with a FPS for some top notch co-op play.  It's got more action oriented missions like the Thumper missions.  And there's the entire versus mode which is geared towards professional competitive play.  That's a lot of content for a free to play game for sure.  As with any game in the sub-genre, it'll be interesting to see exactly what goes "on sale" to support the title.  As with most, its been promised that only cosmetic items would be available for sale and nothing would be sold that affects the core gameplay experience.    With an experience that feels as big as Firefall, I hope Red 5 can make that work.

My time with the game was brief, but a solid experience.  I'll be downloading the beta soon enough to dig deeper into the gameplay and admire a really beautiful looking game.  There's no set release date for the PC game at the moment, but I imagine we'll be seeing an official release this year.