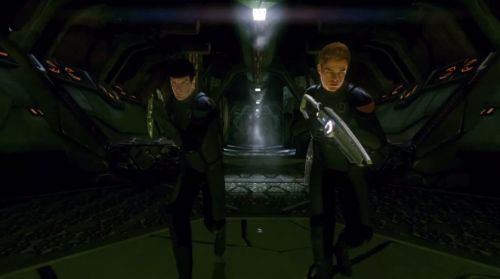 We've got a new Star Trek teaser for you today. It's full of slow motion, base jumping, spacey scenes, pew-pew-pew noises, and glorious lens flare. Players will take control of Trek icons Kirk and Spock in this third-person shooter. Namco Bandai recently let the press get some hands-on time with the event, and we've got some new details on the gameplay.

Star Trek has higher ambitions than being a simple movie tie-in game.  The title will take place between the 2009 and 2013 films. Kirk and Spock will have their own abilities and branching story arcs. Kirk has a more direct set of combat skill, while Spock will be able to use his Vulcan voodoo in  a more stealthy manner. Both online and split screen co-op will be supported. Weapons will be upgradeable, and include settings like "stun" and "kill". AI will take over for the other character if you choose to play solo.

There will be more to the co-op than simply sharing a screen with your friend. Check out this tidbit from the Destrctoid preview:

As Kirk takes cover behind some boxes, Spock manages to grab onto an enemy and use his special Mindmeld attack, thus causing the enemy to fight on the their side. It's at this point that Kirk's leg gets hit...preventing him from walking. Spock now has to carry Kirk to the Medbay, so while Spock is moving it's up to Kirk to shoot at the enemies along the way.

The enemy forces have not been revealed yet. Namco Bandai used generic placeholders for the demo. We'll find out exactly who Kirk and Spock are saving the universe from at E3. Until then, enjoy the video.

Star Trek will support two player split screen as well as two player online co-op. It should be out early next year on the Xbox 360, PlayStation 3, and PC. If I were a gambling man I'd probably say it will launch within a week or two of the movie premiere.