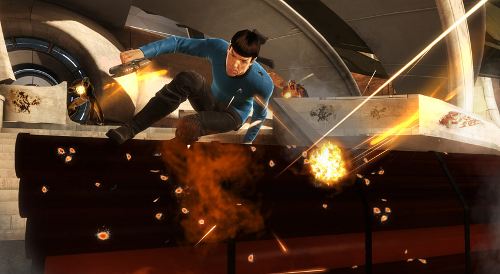 A new trailer has been released for the upcoming Star Trek game, creatively titled Star Trek. The "asymmetrical" co-op gameplay allows players to control Kirk and Spock (the Chris Pine and Zachary Quinto versions) as they uncover a strange piece of technology on New Vulcan which could save lives or destroy everything in the galaxy. Neat!

The trailer has more snarling aliens and electric guitars than one might normally associate with the Star Trek franchise, but this is a video game based on the J.J. Abrams movies, so a little extra adrenaline is in order. We had the chance to see a demo of the game in action at E3 2012, so check out our impressions for more info. Star Trek is scheduled for release April 23, 2013 on Xbox 360, Playstation 3, and PC.