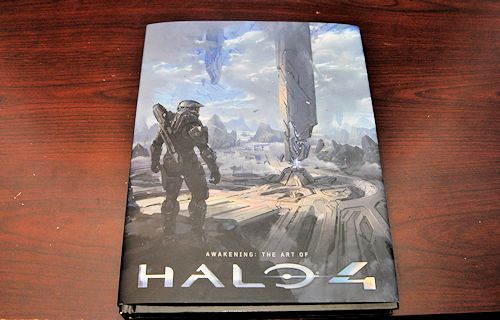 As a long time Halo fan the mythology and evolution of the series has fascinated me.  As someone who has been playing video games for the past 30 some years and covering them for the past 10, I've taken a keen interest in the process behind making them - even making one myself.  One of my favorite things to do is to look at concept art from video games, like those we saw at the Into the Pixel Exhibition at E3 this year.  These pieces of art not only serve a purpose for developer, but are most times beautiful masterpieces that can stand on their own.

Titan Books have released a hardcover book titled Awakening: The Art of Halo 4 which is a collection of concept art from the game.  It's loaded with almost 200 pages of art that not only showcases characters and environments, but also weapons and even the multiplayer. Chapter 1 showcases the environments with the first few sections of the book actually taking you through the game as you go.  Most of the pictures are featured in full page layouts, with previous iterative designs taking a smaller stage on an opposing page along with a text excerpt written by Paul Davies describing the purpose of the piece or featuring a small statement by a 343 Artist.

Chapter 2 features the USNC including the Chief, Cortana, Spartans and other things like weapons and vehicles.  While the Chief himself doesn't see much in variation, Cortana's sections show you just how much 343 wanted to portray her rampancy.  We could have had a much different looking Cortana than the sleek and sexy AI portrayed in the game. Enemies are up next with the Prometheans at the fore front.  Again the quality of the artwork is on high display in both single and dual page setups.  The pages themselves are a heavy weighted paper so there's virtually no bleed through from the other side, which is a definite plus in a book like this. The book wraps up with some misc environments including some from the maps included in Halo 4's competitive multiplayer and cooperative Spartan-Ops areas.  It's pretty amazing just how much work goes into a game like this to make everything look and feel just right.

Awakening: The Art of Halo 4 has an MSRP of $35, which seems about average for a book like this.  The quality is outstanding and will make an excellent addition to any Halo fan's collection.

Right now you can snag the book off Amazon for just $23, which in my opinion, is an absolute steal for a coffee table book of this caliber.