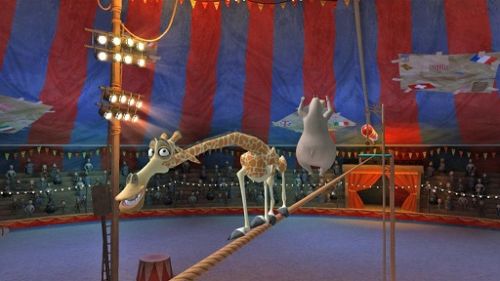 Nothing seems to entertain the younger members of my family more than a CGI cartoon containing gurning animals.  The Madagascar series provides such entertainment, but it has not been until Madagascar 3: The Video Game that co-op has been involved.  Due out alongside the film on June 5th, Madagascar 3 will have local 2 player drop in co-op and will crash land on Wii, 360 and PS3.

Crave more information on the game?  D3 Publishing are more than happy to oblige:

Experience the excitement of the circus as you complete challenging and sometimes suspiciously zany missions given to you by the Penguins, perform amazing publicity stunts on some of Europe's most notable landmarks, and dazzle the crowd with extraordinary acts fit only for a Madagascar-style circus extravaganza! All the Madagascar friends are along for the ride in this comedic circus adventure including King Julien, Maurice and Mort, the Penguins, plus their new circus pals Stefano the sea lion, Vitaly the Siberian tiger, Sonya the bear, and Gia the jaguar.

The game not only contains a 2 player co-op campaign, but also a series of minigames.  Check out this teaser trailer and screens for visual confirmation.