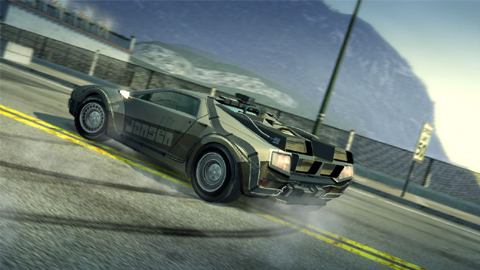 Criterion Games has announced that as part of their 2009 additional content assault for Burnout Paradise, four new Legendary Cars will be available for purchase as separate vehicles, or as a discounted pack.

The first details and screenshots have been announced, and any "Generation X" gamer should recognize the Jansen 88 Special immediately as a knock-off of the famous DeLorean DMC-12 modified by a certain Doc Brown.

Further evidence that Criterion knows how to market content to our stereotype, hitting the Boost button will leave twin trails of fire (but you won't disappear).

Hit the "Read More" link for another screenshot and more details...unless you're chicken. That's right! Hit the L3 button to hover at any time. Sadly, Mr. Fusion is not included.

The other three vehicles from the Legendary Cars pack are as follows:

In addition to the Jansen 88 Special, look out for the Cavalry Bootlegger, Manhattan Spirit and the GT Nighthawk.