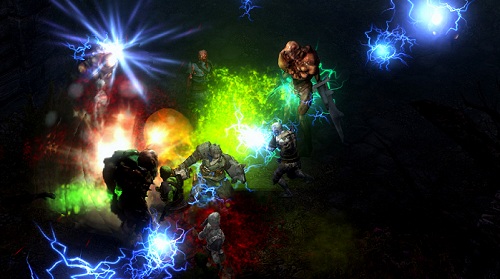 We've been keeping tabs on Grim Dawn for quite some time now. The open-world Action/RPG is being developed by Crate Entertainment, which itself is made up of former members of Iron Lore. That's the team that brought us 2006's spectacular Titan Quest.

Like so many other developers, Crate Entertainment has been bitten by the Kickstarter bug. Unlike most Kickstarter projects, Crate has a working version of their game for all to see. Check out the Grim Dawn website for screenshots and videos. The most compelling video comes directly from lead designer, Arthur Bruno. His six minute Kickstarter pitch is worthy of any hack and slash fan's attention. Don't take my word for it. Let him sell you on the project after the break.

I've been a little wary of Kickstarter projects ever since the inundation of developers seeking to mimic Double Fine's financial windfall. However, this project has been long in development, and the extra money from a Kickstarter campaign should really improve the final product. A donation of $18 will net you the final copy of the game. Check out the Kickstarter site for all the game details (there are many) and the different donation tier rewards. If you've already donated to the project, you'll want to check out this link for details on upgrading your existing pre-orders.

We don't have the co-op details, yet, but we do know online and LAN co-op have been listed as a part of the game's core features.

What do you think, folks? Does this look like a worthy successor to Titan Quest?