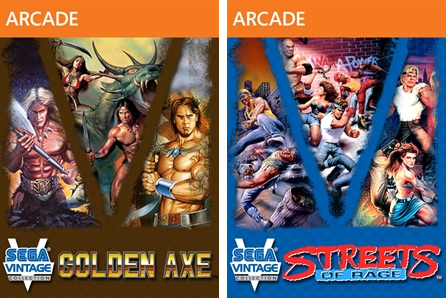 Last month we reported on a rumor that the Golden Axe and Streets of Rage series would be getting new Xbox Live Arcade releases. Those rumors have been all but officially confirmed by Xbox.com product pages for both collections, which showed up and then vanished yesterday. Thankfully a NeoGAF user captured the product descriptions and screenshots for both releases, which are titled SEGA Vintage Collection: Golden Axe and SEGA Vintage Collection: Streets of Rage. All of the games in these collections are already available in the retail anthology Sonic's Ultimate Sega Genesis Collection for Xbox 360 and Playstation 3. Still, the new collections feature slick 3D interfaces (see above), widescreen borders, online multiplayer, new extras, and their own sets of Achievements, so beat-em-up afficionados may want to pick up the XBLA releases anyway. Still no word on PSN versions, but they seem likely.