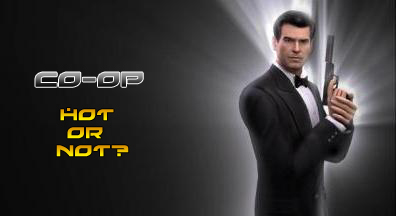 A "relic of the Cold War". That's what M once called the star of 007: Everything or Nothing, the only James Bond co-op game to date. Although the line was spoken in one of the films, it applied to the Bond franchise inadvertently: Everything or Nothing was also the last 007 game to feature co-op, since Activision took the reins from EA and reverted a perfectly good third-person co-op action game back to its relic days of first-person shooter. Don't get me wrong - I enjoyed Quantam of Solace as well...but there's a reason why it's not on my game shelf, and the former is.

Ben Griffiths of Platform Nation posed a question this week: is co-op a fad with an inevitable expiration date? It's a concern for the gaming community, because a large portion of us want to see co-op continue and grow. Single-player experiences change and evolve, multiplayer pushes the bar both online and off...is co-op a true hardwired method of gaming that deserves to be encouraged, or just a facet of the overall multiple-player experience?

Right now, cooperative play is enjoying a certain flavor-of-the-month status and developers are falling over themselves to include it in their games, even to the extent – in some cases – that it takes priority over single-player gameplay in terms of design theory and development time. Not too many complaints have been heard just yet but is it possible that co-op might soon go the way of previous fads like (cover your ears, kids) the dreaded “QTE”?

It's a valid question, for sure, but obviously from someone who doesn't see co-op as an essential part of the bulk of his gaming. You see, Ben apparently suffers from an accute case of AI Headache, claiming that when games are developed with co-op players in mind the AI (artificial intelligence) fill-ins are usually very frustrating.

Certainly, AI players can be annoying - to say the least. But to blame the lack of AI competence on diverted resources doesn't really add up when faced with games like Call of Duty 4: Modern Warfare, wherein the AI was exceptional - and essential - yet it can be argued that the vast majority of time and effort went into the game's award-winning competitive multiplayer. After its commercial success, its sequel pushed harder in both aspects...and then added co-op. Apparently Infinity Ward - once satisfied with the stability of the single player and versus framework - caught on to the not-so-elusive notion that adding co-op draws a significant crowd, one that has actually been gaming since gaming was born. A poster for Joust, one of the first co-op video games

And not only is co-op a staple in gaming history, it's largely considered a development that has yet to tap its true potential. Ken Levine, games director at Irrational Games, answered ten questions for the Academy of Interactive Arts and Sciences in 2009. The final question implored him about the immediate future of gaming. His answer? Co-op.

The last six months has cracked open the real potential of co-op a tiny bit. I've been playing a ton of Left4Dead, Resistance 2, Warhammer Online and I'm not someone who is big on multiplayer except for endless bouts of pathetic WoW solo grinding.

A quick look at our database will tell you that he's not the only one; marketability for cooperative gaming is very high right now. Last week Ubisoft's Patrick Redding single-handedly pulled the rug from under Infinity Ward community manager Robert Bowling, who was adamant that co-op ruins the cinematic experience that single players usually enjoy.

I think now what we have is a generational shift, where the core of the mass market are people who both want to have a deep story, memorable moments and all of the drama and meaning and investment that we typically have always had in single player games, and they also want to be able to share it with their friends.

They don’t want it to be a solitary experience, they want to be able either to sit on the couch with their girlfriend and play, or be on Xbox Live with their best friends and play, and feel that something is unfolding according to some design intention, and they’re getting a chance to experience that but it doesn’t have to be that alone.

Oh, you mean that this interactive medium that we call "gaming" can actually provide an entertaining and optimal story-driven experience without taking the controllers out of our hands? That's amazing! (Excuse me while I pick up my eyes...they just rolled right out of my head...)

Incidentally, Splinter Cell: Conviction (review) scored higher than Call of Duty: Modern Warfare 2 (review) in our co-op reviews, and matched its general score. A glance at the user ratings for each will also show that Conviction (page) is slightly more favorable than Modern Warfare 2 (page) among our readers. Splinter Cell: Conviction is currently one of our reigning champs for co-op friendliness

Ben's editorial essentially culminates in a shaky middle ground that pits solid co-op titles against the ones that never really delivered.

Whilst Gears of War and Halo might have been successful in offering a slick co-op story experience on a par with strictly single-player shooters, other titles haven’t quite cut the mustard.

Perhaps it’s time for a few other developers to follow Valve’s lead in recognizing where co-op play is best employed as well as where to draw the line. Otherwise we’re in danger of sacrificing the possibility of a suite of games finely tuned to one particular playing experience in favour of a market full of jacks-of-all-trades and masters of none.

That's not necessarily a bad idea, and one that many of our users and staff have insisted is the only way to keep games diverse and interesting. To call co-op a "current craze", however, is a mistake. Just because a cooperative mode or campaign was less-than-stellar doesn't demean the entire concept of cooperative gameplay.

In 2010, we will see our games database crack 1,000 games (the mostly-complete list is at 973 now). Bottom line: the past is riddled with co-op, the future promises more co-op, and the present...well, the present is the best time to get on board.