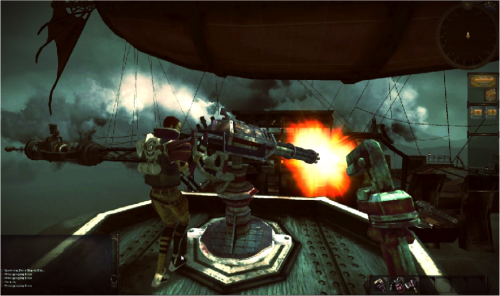 Soon to beginning their 2nd closed beta testing weekend, Muse Games is well on their way to finishing their multiplayer title, Guns of Icarus Online, and starting to hand out beta keys to their Kickstarter supporters.

After mentioning on their Twitter page, Muse Games has started setting up their next beta test for Guns of Icarus Online, and are gearing up for its final stages of development before release time. Set in a post-apocalyptic future, Guns of Icarus Online pits teams against one another via hot-air balloon ships with mounted gun cannons. Adapted from the original PC title, Guns of Icarus, Muse Games has decided to have this game put more of an emphasis on the multiplayer and co-op aspects of the series, making teamwork the primary focus. After choosing a profession: Pilot, Engineer, Gunner, or Captain, the survival of your team’s ship becomes your primary objective. By helping your teammates fight off opposing team’s gunfire, you’ll need to use your role’s abilities to perform different functions that will help reinforce, repair, or improve the quality of the vessel. Each class has unique strengths and weaknesses that require a balance between one another to help the ship function properly in a gunfight. Guns of Icarus Online also boasts a number of distinct features, such as a leveling system, an item trading system, and a randomly generating map to explore and battle on.

Even if you don’t have friends to play with, NPC crew members will fill the empty spots of your team to help bolster your ships defenses. Much like its predecessor, everyone on your team plays an irreplaceable role in a battle, making co-op play the key feature of this game. Like working on a real life ship, any single member can’t hope to do everything that is required, making this a perfect co-op title to have on your Steam account.

No official release date has been announced as of yet, but Muse has projected the game to be finished sometime in August. Guns of Icarus Online is also scheduled to have open beta testing at some point this summer before its release on PC and Mac, so we’ll make sure to keep an eye out for any information regarding its release.