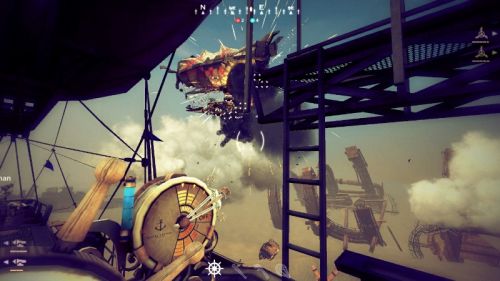 Guns of Icarus was a web-based game that had an interesting concept and some pretty good co-op components, but it always felt a little lacking in some areas. There was definite promise in the underlying mechanics, though, and Muse Games decided to see if they could make some of that promise a reality by launching a Kickstarter campaign a little while back. The fruit of their efforts was recently released on Steam, though it is not a finished product. Currently, Guns of Icarus Online features team-based deathmatches, and that’s it.

However, there is more to come - specifically, a full-length campaign that can be played cooperatively - and based on what I’ve seen so far, I am hopeful.

As the game currently stands, you are able to check out the three new character classes, play a practice match with friends against AI/target ships, and play in a team deathmatch with up to 32 other people called “Skirmish” mode. The 32 players split up into groups of 4 to man a ship, and then 4 ships on a team, before plunging into battle on the high… well, skies, I suppose. Now, victory in this endeavor is very cooperative in nature, as a group must work together on their ship to keep it aloft and shooting; and each ship must work together as a group to take down the other ship. However, this type of game also comes down to a PvP interaction, something that is not covered by Co-Optimus (you can check our definition of co-op for more detail on that).

Despite that, I still dug into the game a little to see how it's progressed since its earlier days. Here's what I saw that I liked and has me hopeful for a full co-op mode:

- Player Classes/Roles: the Pilot, the Engineer, and the Gunner. The names pretty much sum up the role of a particular class, but that doesn't mean they are solely dedicated to that. When things start going bad, everyone needs to pitch in and do what needs done to pull out of it ok. The very nature of the classes leans towards a very natural cooperation amongst players

- Mechanics: there have been plenty of team-based games where players have different abilities that have to be used in some combination in order to achieve victory. However, there have been very few where the roles are divided in such a way as this. Working as a crew on a ship scratches a particular cooperative itch that nothing I've played to date has quite been able to scratch

So, for now, Guns of Icarus Online is a team-based PvP affair. A fairly fun one, I’ll grant you, but PvP nonetheless. There is some good news on the way as Muse Games is working on putting together an “adventure” mode that will be more "purely" cooperative. The full details of this mode haven’t been divulged just yet by Muse (their exact quote is “Adventure Mode is in ongoing development, and the precise feature set, pricing, and distribution scheme are yet to be determined”), but it certainly seems to be the type of mode/game that we wholeheartedly support at this site.