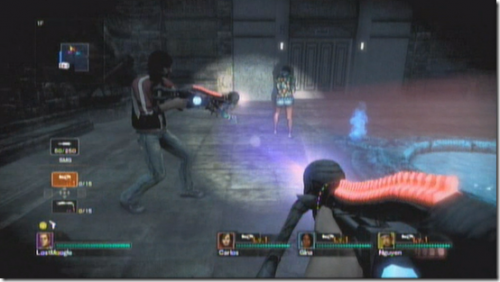 Still think Japanese developers don’t have what it takes to make fun games? Well, Square Enix had signed on to make a new game called Catacombs and was well into development of the RPG Shooter co-op before deciding to put it on hold.

Square Enix was originally planning to unveil Catacombs at E3 2011 for the PlayStation and Xbox, even far enough into development to be a playable demo. However, Square Enix decided to hold off on completing the title for unknown reasons. A team RPG shooter, Catacombs throws players into a dark, underground labyrinth beneath a historical museum, now mysteriously under attack from demonic monsters. Trying to figure a way out of the mazes laid before them, players must travel from one safe point to the next, much like Left 4 Dead’s main goal, as your team tries to make it to the elevator (“saferoom”) and move onto the next stage of the game. Since the game sports randomly generated maps, usually with narrow hallways and rooms swarming with monsters, this title could’ve been a shooter that we hardly see these days. Much like in Left 4 Dead, CPU players will also take over for characters not being used by human players, and you must work together as a team of 4 to survive. From what we’ve heard, the guns in the game often look like you’re holding skeletons or giant insects in the palm of your hand. Other weapons featured where a mantis shotgun, a pistol that resembles a dragon (that gains explosive rounds), and a skeleton machine gun. By leveling up in the game, the guns grow more powerful as they do grotesque, gaining appendages or body parts in their evolutions. Beyond that, we don’t know much more about the guns and their special powers, but we do know that other magical items like rings make an impact in teamwork. Though this game’s development might be on leave for the moment, it’s something that Japanese video game lovers are be desperately waiting for; something to bring Japan back to life and show us some great co-op gameplay too. If Catacombs plays as well as a Left 4 Dead, then perhaps they should reconsider canning the game. After all, with games like this floating around in gaming studios out there, they could give us the Japanese video game comeback we’ve all been waiting for.