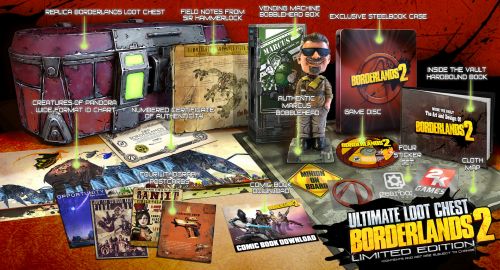 Two collector's editions have been revealed today for Borderlands 2, which releases this fall on the Xbox 360, PlayStation 3 and PC.  The Deluxe Vault Hunter’s Collector's Edition and Ultimate Loot Chest Limited Edition will set you back $99.99 and $149.99 respectively.  Both editions are loaded with goodies for one of this year's biggest co-op games.

The Ultimate Loot Chest includes all of the Vault Hunter's items, plus a collectable scaled replica of the red loot chests found throughout Pandora in Borderlands 2; steel book case; Creatures of Pandora wide-format ID chart; lithograph postcard set; field notes from Sir Hammerlock; cloth map of Pandora; and a numbered certificate of authenticity.

If you pre-order at "participating" retailers you'll also get access to the Borderlands 2 Premiere Club.   Members of the club will be able to download the Gearbox Gun Pack, a Golden Key, the Vault Hunter’s Relic and an all-new fifth character class - the Mechromancer.

The Golden Key is used to unlock a rare in-game item in the mysterious Golden Sanctuary Loot Chest found in Borderlands 2. The Vault Hunter’s Relic is an in-game item that boosts players’ gear-hunting fortune while playing solo or teaming up with friends. The Mechromancer character class will be available following launch when development of the character is complete and is free to those who pre-order Borderlands 2, and will be available for purchase for those who do not.

And there ya have it.  Sadly Gearbox didn't randomly generate a bazillion weapons to include in the loot box.  Now that would have been cool!

Borderlands 2 is set for a September 18th release.  It features four player co-op, including two player local and combo co-op.  You can pre-order the game right now from Amazon and support Co-Optimus!