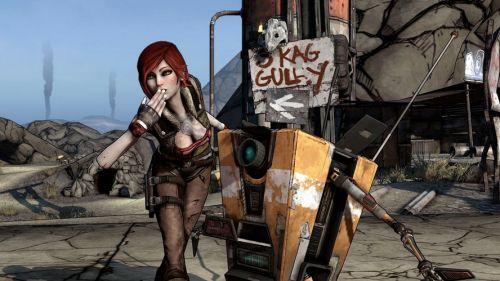 Do you want to be in a video game?  Do you look like the subject in the lead image? (The human, not the robot.)  Are you going to be in Texas tomorrow?  Or more accurately, Dallas, Texas?  Gearbox Software is holding a casting call for a live action version of Borderlands' Lilith.  Whoever wins the role will appear in Borderlands 2.  The role will be similar to that of the Guardian Angel from the first game.

There are two ways to apply for this job.  Well, one, now.  You need to be at Janimation in Dallas, TX, tomorrow, December 7th.  Online applications closed on December 3rd.  Remember, it's a contracted job, not a contest.  You can see all of the details here.  Considering the events surrounding the Guardian Angel from the first game, this is intriguing information, to say the least.

Borderlands 2 will most likely be out next year for the Xbox 360, PS3 and PC.  It will support two player local co-op, four player online co-op, and as of now, three player combo co-op.