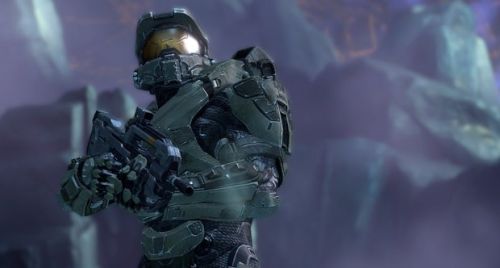 Fans of the Halo series have a while yet before Halo 4 arrives on shelves, but that doesn’t mean 343 Industries doesn’t want to keep gamers in the dark about the upcoming title. Frank O’ Connor, the Franchise Development Director at 343, has taken the opportunity to reveal more of the Halo 4 storyline and what we can expect to get out of preordering the Limited Edition version.

From just the gameplay footage of the Spartans engaging in a gunfight, the Battle Rifle looks great without the bloom reticule and sounds like it has equipped a silencer this time around. Halo 3’s battle rifle was a lot louder than this game's version, but most players would probably take a quiet BR over a Halo Reach DMR any day of the week.

O’ Connor also talks about the Covenant returning in Halo 4, but aren’t the main enemy of the game. They aren’t pleased to see Master Chief alive and well after crippling their entire governance, and are mysteriously involved with a whole new enemy has presented itself (whether they are enemies or friends with one another has yet to be revealed). This undisclosed enemy will bring new weaponry to the Halo franchise and answer a lot of questions about the Coventant’s background:

We have things mapped out pretty far, probably about ten years, but they’re pretty vague, they’re big plot points. We thing that X will happen, we think Y will happen, we think they should go visit Z. There’s a danger that you’ll get granular in your planning because if this was a novel, you could just write an end. But it’s not a novel.

This video doesn’t mention anything about the new co-op mode coming to Halo 4 called “Spartan Ops”, supposedly being much like Special Ops in the Call of Duty series, but there were a ton of lot of details about Halo 4’s co-op aspects featured in a former Gameinformer issue. The co-op campaign is also planned to be almost as big as the main campaign, so co-op gamers will have a lot to look forward to with Halo 4. The official box art of Halo 4 has also been unveiled (very beautiful box art, we might add), along with details about the Limited Edition perks for those that choose to preorder the game. Here's what you'll get:

Everyone will have access to select Specializations, but those that purchase the Halo 4 Limited Edition will receive the ability to unlock six Specializations early, available at launch on Xbox LIVE. You can use them, one at a time, to achieve higher ranks in your Spartan career. In addition to gaining access to new ranks, Specializations unlock new customization options.

The UNSC Infinity Briefing Packet includes a Spartan armor customization schematic, information about UNSC weapons, an introduction to the massive ship UNSC Infinity, and insight into what it means to be one of humanity’s finest warriors: The Spartan-IVs. Story lovers will especially enjoy this in-fiction offering that provides a glimpse into the indoctrination of Spartans aboard the Infinity.

The Special Edition of Halo 4: Forward Unto Dawn is a 90-minute extended version of the live-action digital series which will take fans back to the terrifying beginning of the Human/Covenant war, when the Master Chief inspired a young cadet who would eventually become a leader aboard the UNSC’s greatest vessel ever: the UNSC Infinity.

Halo 4's Limited Edition will be going for around $99 in the US and no Legendary Editions of Halo 4 will be available this time around. Sorry guys! 343 wanted to "avoid making people choose what set of content they want" and instead provided sufficient content for the Limited Edition version. It will still sport a sleek, steel casing for those wanting to show off their epic fandom to fellow gamers. Halo 4 will be making its North American debut on November 6th, the same day as the 2012 Presidential Election. Like O’ Connor says, preordering Halo 4 will make voting and picking up the game in the same day that much easier, something we highly recommend gamers doing considering all of the content up for grabs.