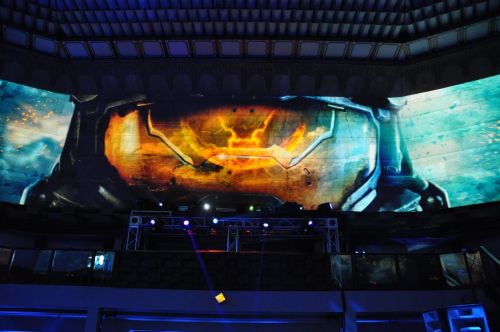 Many were surprised when Halo 4 announced it would be dropping fan favorite Firefight mode in favor of a new co-op mode called Spartan Ops.  I got some hands on time with the mode at a private event during E3 2012.

Spartan Ops features a four player online co-op campaign with weekly content delivered to players.  Each content drop will be prefaced by a cinematic sequence, which if like the one I saw, was fully voiced and animated telling a short story.  Accompanying the story is a group of five missions for four players to tackle.  The game's executive producer, Jerry Hook, told us this method of content delivery was designed to keep folks coming back on a regular basis.

The mission we played had us checking out a Covenant dig site.  Pre-mission we could customize some pre-defined load outs and then were given the option to pick from these on each spawn.  Right away we faced off against some of the new looking covenant grunts and elites mostly.  While the aesthetics were different, you could still tell what a grunt was.  That said, once I pulled the trigger of my assault rifle I was shocked.  The familiar pulse of it was replaced with deeper and more brutal sounding gunfire.  In fact, every weapon featured these news sounds which, in a way, made me have to relearn what was being fired.

As our mission progressed we slowly took care of enemies, working in a group by flanking and eliminating everything in our path.  Just when it seemed like we had a grip on what was happening, the game's new alien race stepped in and mixed things up.

It's hard to say exactly what these guys did differently, their movement was a bit more erratic than the typical Halo enemy, but they also seemed to be more aggressive.  While the Covenant usually retreats when you attack, the new race seemed to push forward.  Because of this switch up in tactics, I found myself dieing more often.  The respawn system works exactly like it does in the campaign, you an respawn on another player as long as they aren't in combat.  When you respawn you can once again pick a loadout to help change up tactics. What I really enjoyed about the Spartan Ops mission we played was the way the game mixed up the objectives.  Over the course of the level we had several waypoints to follow, switches to hit, as well as a defense objective.  Perhaps the highlight of the level for me was picking up one of the Forerunner weapons.  The one I found was a bit like a shotgun that simply disintegrated enemies on contact.

The mission ended with a stand off around a mysterious artifact.  After the mission players earn experience which count towards their Halo career and can be used to customize their character.

All in all Spartan Ops seems like a worthy successor to Firefight.   While the mode won't feature the arcade like replayability we saw with Firefight, the consistent content delivery combined with the story reveals should keep players coming back for more.

One final piece of news I managed to squeeze out of Jerry Hook, he confirmed that the game will retain co-op throughout the main campaign as well.  It's looking like Halo 4 is shaping up to be a worthy successor in the Halo franchise for co-op fans.  If anything, you'll be getting your full $60 worth.