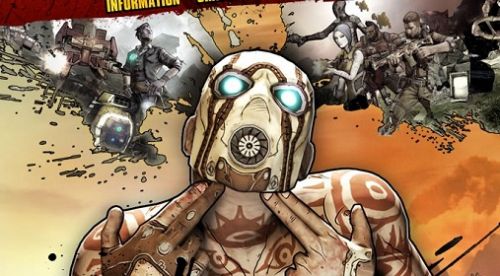 The Borderlands 2 final box art was recently revealed. With all the commotion surrounding the $100 and $150 special editions it was easy to overlook the version that all the normal people will be buying. The cover image should be familiar to anyone who remembers the iconic artwork from the first game. I'll admit I thought the original Borderlands cover was badass. Here's a reminder, just in case you missed out on one the best co-op games of this console generation: The new box art doubles down with the violent imagery, and while not as original as the first, it's still pretty damn bad-ass. Just picture your favorite current gen gaming system's logo (as long as it's not the Wii) mounted on top the image and you'll get the idea of the final product. I honestly can't remember if anyone complained about the alluded suicide-blood-spray-birthing-a-mosaic-of-Mad-Max-awesomeness, but those kind of complaints sound like so much mooing to me anymore.  I'm just going to assume everyone who enjoyed Borderlands will dig the cover, and those who didn't, won't. Fair enough?