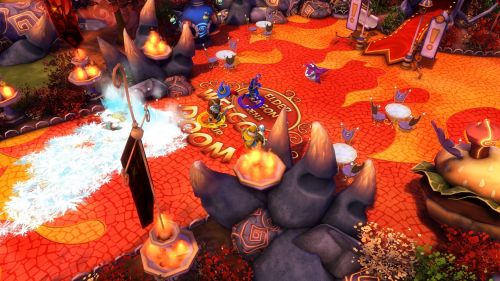 The team over at Critial Studio shared their first developer diary for their upcoming co-op game Dungeonland. Previously known as "The Co-Op Sheep Killing Simulator", Dungeonland is a 4 player co-op action RPG that focuses on creating a meaningful cooperative experience. The devs at Critical are designing for cooperation first and formost as they want to create a hack and slash game that gets people playing together.

The first entry of the dev diary outlines where the team is getting their inspiration from. Games like Gauntlet, Streets of Rage, and Golden Axe are all mentioned - three of the most classic co-op games. The prototypes look like something that you would craft out of graph paper, and it is awesome to see where the game began and where it is today. Fast forward about 3 years and we are presented with something that actually looks like a game. The developer, Mark describes their current state as 'Dungeonland 3' as they have basically started over twice in their quest to design a truly cooperative game.

Possibly our favorite part of the post is the detail that Critial go into about what makes up a co-op game. Here is a summary of their "Pillars of Co-Op" The Dungeon Master is a really cool idea that reminds us of the AI director in Left 4 Dead, but this time it will be one of your friends dictating what happens in the game. We're looking forward to the next developer diary from Critical Studio which is going to focus on the art from the game.