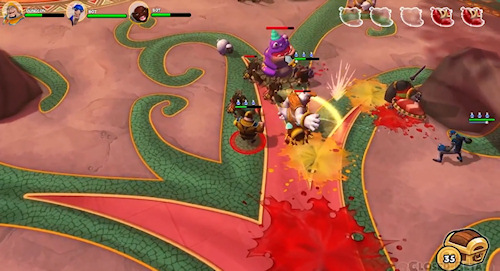 We've been following DungeonLand since it was announced last March, and thankfully unlike some other games coming this year, this one is coming in under a year's time - as opposed to a 4 year wait.  The 3 player co-op hack and slash game is set to release on the PC on January 22nd.  With that Paradox is taking pre-orders for just $9.99 on the game, which will be available from GamersGate and a handful of other digital distribution services.

Pre-ordering the game will grant you access to some exclusive DLC which includes some new monsters and other goodies if you decide to play the game's more competitive mode where one player controls the dungeon master versus the other players.

DungeonLand supports three player online co-op and three player local co-op, including combo co-op for a mix of local and online players.  Be sure to check out our interview about the game where we learn a lot of the nitty gritty details.