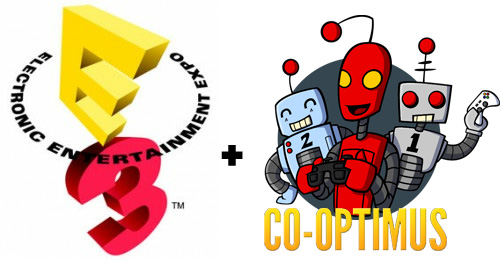 The bags are packed, the plane tickets are booked, and the maid is fluffing our hotel pillows.  Co-Optimus is on their way to E3 in Los Angeles California, bringing you the latest and greatest co-op gaming coverage over the next week at the show.  But what exactly does it take to cover an event like this?  Some folks might think E3 is a 4 day party of playing games, but the reality of it is quite a bit different.

Let's see what each of our four Co-Optimus Editors have in their bag to help cover and survive the show. When I travel to conventions, I usually try to pack as light as possible, but since our E3 trip will involve a lot of content creation, so I need to bring extra goodies. Here’s the full rundown: This E3 I'm changing things up.  No more shoulder messenger bag, no more MacBook.  It's like a whole new start.  Needless to say, you need to lug a lot of shit to these things. Apparently my gear isn't good enough. Fine, be that way. I'm going to bring THIS:

I'm driving to LA so I have little more space than my fellow event goers. I just kind of threw this stuff together. I'm not heading to E3 until Tuesday, so items may be substituted without notice. Especially when I get panicked calls from the fellas, since apparently no one is bringing clothes.

Since I actually reside in California, this is all I'm comfortable publicly documenting. There will be more. Seriously, LA is like Mad Max times in the bad sections. I'll be packing some video heat this trip so I will be including some more technical equipment than I usually have around. I wasn't allowed to bring my Luchador masks across the border so I had to resort to more conventional things.

Did I mention there are four of us in one hotel room with all this crap?