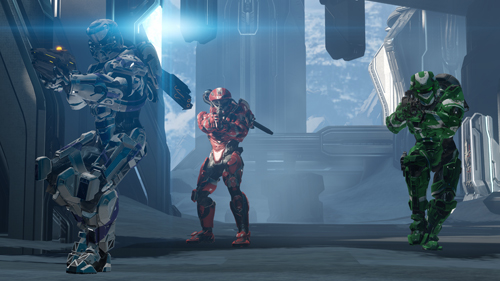 Halo 4 is out continuing the story of Master Chief and Cortana.  The series has a long standing tradition of supporting co-op play, with each successive game increasing the accessiblity for gamers.  We've compiled a handy FAQ as a compendium to our database entry.  This is everything you need to know about Halo 4's cooperative experience spelled out in plain English.

How many players can play Halo 4 locally (couch co-op)?

Two players can play split screen co-op on one system.

How many players can play Halo 4 via system link or LAN?

Four players can play via LAN or system link including combo co-op supports for two players per system.

How many players can play Halo 4 online?

Four players can play online together in both the campaign and Spartan-Ops mode.

Is a Gold Membership required for the second player in combo co-op on the 360?

Yes. An online game can only be played if both players have a Gold account.  Otherwise you are restricted to local co-op play.

What direction is the screen split in couch co-op?

The screen is split horizontally and letterboxed to maintain the correct aspect ratio. How do you begin a co-op session?

Campaign - Choose campaign, press X to invite friends or press a button on another controller to join in locally

Spartan Ops - Choose Infinity, Spartan-Ops and select a "Play Chapters" to play with friends online or locally.  Choose "Find a Game" for matchmaking on a particular mission.

Can I drop in or out of a game in progress?

You can drop in or out during a Spartan-Ops mission but not during the campaign.

What are the network options of Halo 4?

How does save progress work if the host is further along than I am?

You can join any game and any progress completed will be unlocked on your local game.  Your save will not be overwritten, but if you start a new campaign you can choose to start from that section.

How does game progress work?

Your Spartan has a persistent XP and reward system regardless of which mode of play you are in.  You'll always earn towards this - 1 spartan per profile.  Campaign progress is saved locally and any progress made online is unlocked on your profile.

Spartan Ops missions can be played in any order but progress is always saved.

Do enemies scale based on the number of players?

There seems to be some limited scaling in the campaign.  Spartan-Ops also appears to scale slightly based on the number of players.  You'll want to change the difficulty though for maximum effect.

What does Halo 4's season pass get you?

The Halo 4 season pass costs $24.99 and will allow you to download three sets of DLC as they are released.  There are currently three map packs planned all focused on the game's competitive multiplayer.

Will I have to pay for more Spartan-Ops Content?

No, weekly episodes will be released each containing 5 missions to play.  The missions take on average 15-20 minutes to complete and vary in objective.

Can I play old episodes of Spartan Ops?

Yes, but after each week's episode has passed, you can no longer play that episode using match making. This means you'll only be able to play "old" episodes of Spartan Ops with friends.

How do I change my network from Xbox Live to LAN or Local?

Hit the start button to bring up the Spartan Hub, go to Settings & Files, select Network and choose the appropriate network.