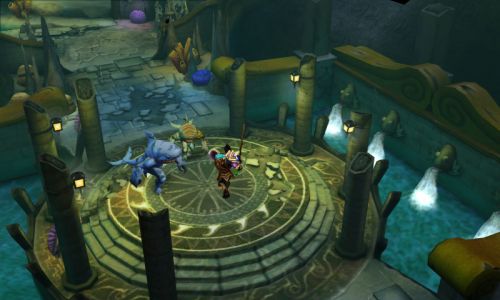 2012 sure seems like the year of the action RPG, because hot on the heels of Diablo 3 (and before Torchlight 2) is a new entry on the 3DS called Heroes of Ruin. From what I played it'll be a solid entry in the genre, though  it was a little on the generic side.

Heroes of Ruin is viewed from a quasi-isometric perspective, but as you move behind objects, the camera might zoom a bit or pan around to keep you in view, which takes some getting used to. Combat is relatively simple, with a melee button and three special attacks mapped to the X, Y and A buttons. The D-pad is used for quick access to health potions, a quick equip (when you find an upgrade) and a quick sell button, which will instantly cash in a piece of junk loot for gold.

There were plenty of sidequests in the short demo version I played, though they were of the "collect X widgets" or "kill Y baddies" variety, and it culminated in a boss fight. There were a couple short puzzle sequences to break up the action as well.

For a 3DS game, Heroes of Ruin has better co-op features than we usually come to expect from a portable title. Four player drop-in/drop-out co-op is supported for both local or online play, and there's even full voice over IP chat integrated out of the box. Unfortunately, the co-op wasn't working properly on the demo unit, so I'm not able to say much other than what we were told.

While the demo I played felt a little too generic for my tastes I'm hopeful that co-op helps elevate it, because we definitely want more games to support co-op as thoroughly as Heroes of Ruin does, especially on a portable system.

Heroes of Ruin will be in stores on July 17th.