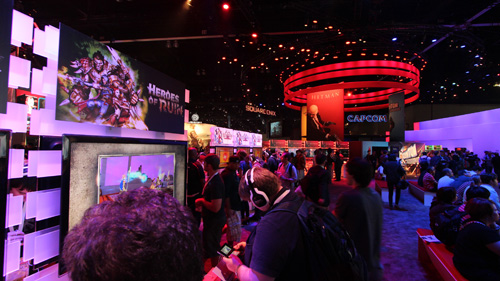 We spent a good chunk of time checking out everything at the Square Enix booth, as they had a pretty strong lineup this year. With Tomb Raider and Hitman: Absolution stealing most of the attention. There were some other cool titles that caught our eye like Quantum Conundrum and a co-op gem for the Nintendo 3DS called Heroes of Ruin.

We have seen Heroes of Ruin at previous shows, but this was the first time that we took a good chunk of time to sit down and play it. At its roots, Heores of Ruin is an action role playing game (ARPG) that has four distinct heroes trying to save the fantasy world of Bale from a deadly curse. Four mercenaries must form a fearsome alliance using seamless drop in and out 4 player online co-op.

Fortunately we also had a chance to talk with one of the product managers for Heroes of Ruin, Luke Icenhower who gives us the hot scoops on what the game is bringing to the table. Enjoy the video where Mike and Locke take you through the Square Enix booth, play some Heroes of Ruin and cap it off by talking with Luke.