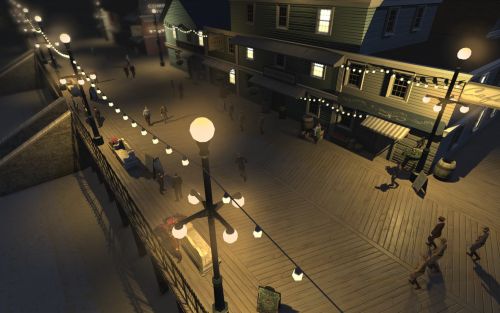 There's a new game on the horizon from the developers of Tropico, Haemimont Games, that should be on turn-based strategy fans radars.  It's called Omerta: City of Gangsters and it puts players in the role of a "the boss" - an immigrant on the rise in a mafia like family set in Atlantic City during the 1920s.

In a demo of the game I saw at E3 2012 I was shown how the game was broken up into two distinct parts.  Players choose from a map of missions, each with an overall goal.  Once inside the mission you'll be presented with numerous sub missions as well - all which work towards completing the bigger overall challenge of the level.  Players need to use strategy to decide which missions to accomplish to gain bonuses and money to use in the second part of the game, which is the turn based combat phase.  More on that later.

During the city aspect of the game, you'll choose missions like performing drive by shootings, creating your hide out, or setting up a money laundering rings.  You can create speakeasies or bribe cops and politicians to coerce areas of the town into your control.  In Omerta money can either be clean or dirty, depending on how you acquired it.  Dirty money can be used to purchase certain things, but you'll need clean money if you want to legally acquire anything in the town.  As you complete missions and earn new members of your gang you'll begin your rise to power.

Taking over neighborhoods in Omerta contributes towards your rating as a mob boss.  You can be liked and feared.  Notice I said AND.  In a move that's a little different than the traditional good vs evil, you could be 100% Liked by folks as well as 100% feared.  This sort of situation will yield unique bonuses, though we weren't' told exactly what they are. After the strategy phase plays out, you'll be dropped into a turn based scenario where the combat in the game takes place.  This phase is actually optional, but where's the fun in that?  If you've played a turn based strategy game like Jagged Alliance, you'll be right at home.

In terms of co-op gameplay, we were told that players could team up online to perform missions like robbing a bank or working to take down rival gangs.  Details were scarce, but it definitely sounds like it has potential.

If anything, Omerta is a entirely fresh setting for the genre.  Adding co-op play to the mix makes it even more enticing.  Omerta will be out on Xbox 360 and PC this Fall.