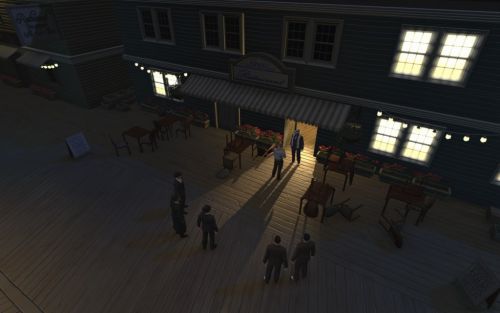 Omerta: City of Gangsters has gone gold and will be available on the Xbox 360 and PC on February 12th.  The turn based strategy game is being developed by Haemimont Games, who also developed Tropico 3 and co-op game The First Templar.  The game takes place in a 1920s Atlantic City with the player taking the role of an immigrant working his way up the criminal hierarchy.  The single player campaign is said to offer over 15 hours of content through a historically accurate Atlantic City on 20 different maps.  There's no word if Enoch Johnson (aka Nucky Thompson) plays a part in the game, but we gotta hope for at least one cameo, right?

While the gameplay itself features a business simulation, as well as turn based and tactical battles, there will be plenty of RPG like elements as well.  Outside of the singleplayer is a competitive multiplayer mode and two cooperative modes - Bank Heist and Jailbreak - both which support two players. The co-op modes don't feature any of the business simulation part of the gameplay the single player has, instead it focuses solely on the turn-based aspect.  Players will be given some money, can equip their gangsters, unlock skills, and focus on working together to complete the objectives.

Sounds promising and if anything, it's something unique that we really haven't seen for co-op gamers.  February is shaping up to be quite the busy month for games.