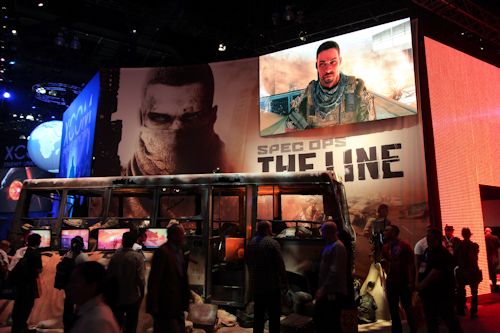 It was only recently that we found out Spec Ops: The Line would feature a 2 player online cooperative mode.  While the game won't launch with with the mode present, it will be available shortly after launch with four maps as a free piece of content.  We went hands on with the mode at E3 2012 and came away pretty impressed with what it offers.

Bucking the trend, the add on mode isn't exactly a survival mode like many games are adding these days.  Instead the missions are objective based with various tasks.  The one we tried had my partner and I fighting our way out of a compound.  We were told other missions would feature different objectives, or even time based sequences that players needed to complete.

One thing was immediately apparent - even on medium difficulty Spec Ops: The Line is a brutally difficult game.  It's slow moving and tactical, with bullets making quick work of your character.  Cover is an absolute necessity, and in co-op, team work and cover fire is equally as important.

The map we played looked a bit like a Middle Eastern marketplace and my partner and I worked up opposite sides taking turns pushing up from cover.  Going into cover is as simple as pressing A, and once in cover you can vault out, or slide quickly to the next piece.  It feels similar to Gears of War or Army of Two, but because your character isn't much of a bullet sponge, it feels a lot more threatening and stressful.

Players can revive each other if they are downed and if both players are down it's mission over.  While we didn't fail our mission we definitely had some close moments as we tried to revive each other.

The gunplay itself felt solid while the character animations as you slid in and out of cover were standout.

It took a solid chunk of time to get through the mission, probably around 15 minutes - and we were promised the multiple difficulty levels would help with replayability.

Spec Ops: The Line is set to come out on 360, PS3 and PC at the end of this month.  While I'm not sure if it warrants picking up the game just for co-op, it seems like a nice bonus.  We'll have a video preview up of the co-op mode in the next few days, so be sure to check back with Co-Optimus.