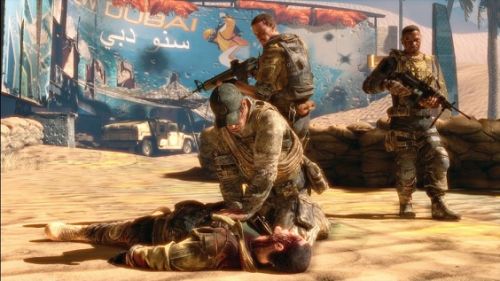 The desert is a desolate place (funny that) where people traditionally scrap a living from the few pockets of survivable habitat. That's unless you decide to build a giant city in the middle of it like Dubai. Spec Ops: The Line paints a 'what if' scenario where Dubai has been almost destroyed by a huge sand storm and troops have moved in for a tense stand off. New screens have arrived that suggest the game will be very moody - and very sandy.

There is still no news about the nature of the co-op mode in Spec Ops: The Line, but 2K have said there will be one. With the game slated for a spring 2012 release, Co-Optimus will be sure to bring any co-op news for the game when it arrives.

Update:  We've just received word from a PR representitive for 2K, Spec-Ops; publisher,  that the co-op mode in Spec-Ops the line is no more.  We were given a few reasons why the game's single player wouldn't contain co-op, something that was never originally promised, but no reason was given as to why a separate included co-op mode doesn't exist anymore.

The game still will offer a competitive multiplayer mode.