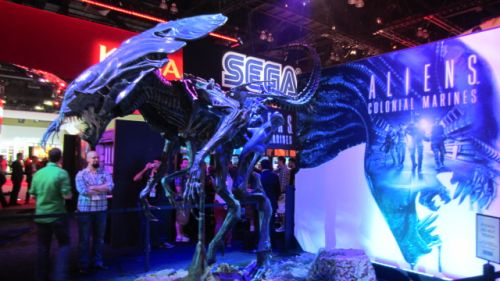 Aliens: Colonial Marines had a strong presence at the Sega booth. Gearbox managed to score the original Alien Queen as well as a sweet Powerloader/Soldier Alien display. The multiplayer versus mode of the game was available to the press (short line) and  public (ridiculous line). The gameplay featured a team of Marines in a heated battle against a pack (gaggle, hive, herd, murder?) of Xenomorphs. Yeah, I know it's not co-op, but at least Mike and I would get a chance to feel how the game played. And it felt goooooood.

The first thing I noticed was the sound. The gun noises of the M41A were perfect. The bugs can screech all they want, but the fluid sound of the pulse rifle is something unique to the Aliens movie. There were other loadouts available featuring an assortment of shotguns and battle rifles, but I went with the tried and true pulse rifle early in the round. I had varied results, which was to be expected as a newbie.

Gearbox employees were playing as the Xenomorphs, and they were merciless. They were quick to pick off stragglers, using speed and their sneaky wall crawling abilities to get behind our team. They were playing some form of horrific one-shot death tag. It seemed as if they so much as touched us, we died.

Every so often a large Alien Queen would thunder into battle and wipe out most of the Marines. Respawn city for everyone. I switched over to a shotgun loadout and started wrecking drones. Thankfully, I did not notice any damage from acidic blood. It might have been in there, but I'm pretty nimble when I'm running for my life. While waiting to respawn from a particularly brutal mauling, I checked out the control scheme and noticed that I could pull up my motion sensor with a shoulder button. Oh REALLY? It was officially "on." I quickly told Mike about the motion sensor, and that changed the game entirely. Once the crunchy Xenomorphs lost their ability to sneak up on us they were so much cannon fodder. We easily avoided the Queen's rush and simply grenaded the hell out of her. We couldn't use our motion tracker and shoot at the same time, but we could quickly change from one to the other.

After the match was over, Mike summed it up very nicely: "That was like the Left 4 Dead versus mode with an Aliens setting." I couldn't agree more.

I should mention that we did not get a chance to play as the aliens. Word is their controls take some serious getting used to. Their ability to run around on ceilings and walls wreak havoc on a player's sense of direction. I didn't get to experience this myself, but it's interesting that the Xenomorphs were solely under the control of Gearbox staff.

My experience with the game put me on an Alien kick. Since E3 I've seen Alien, Aliens, Alien 3, and Prometheus. My 10 minutes with Aliens: Colonial Marines felt like more of an extension of Aliens than any of the other films. I can't wait to play the cooperative campaign.

Aliens: Colonial Marines supports two player local co-op and four player online co-op. It will launch on February 12th, 2013 and be available for the Xbox 360, PlayStation 3, and PC.