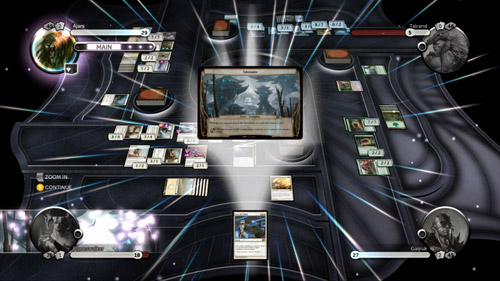 We recently gave you guys our E3 impressions of upcoming MTG game, Magic the Gathering: Duels of the Planeswalkers 2013. One of the new features we mentioned, which is quite highly anticipated, was the fan-requested manual tapping system. A recent dev diary can show the curious exactly how it will work. It's the little things, right?

There's also a new trailer for the game. This time it's of the live action type:

Also, for people interested in the physical cards, there will be a special promotion for MTG: Duels 2013. If you purchase the game, you'll get a voucher for a six-card booster pack you can redeem at a participating store. There are three types of booster packs, depending on which platform you get the game for. The first five cards in the packs will all be random, but the sixth card contains a special, pre-determined card. The XBLA booster pack will contain the Primordial Hydra card, the PSN pack the Vampire Nocturnus, and the Steam/iPad pack the Serra Avatar. Pretty neat promo, I'd say! It will run until Dec. 13, 2012 (while the packs remain available, of course).