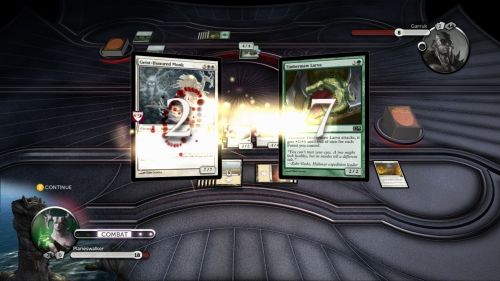 A new deck pack is available for Magic the Gathering: Duels of the Planeswalkers 2013. The Rogue's Gallery and Mana Mastery decks make up Deck Pack 3. It is available now through the Xbox Live Arcade, PlayStation Store, and Steam for 240 MSP, or $3. You can use these cards in the cooperative Two-Headed Monster mode as well as the other game types.

The "Rogue's Gallery" is a Black and Blue deck which "disrupts your enemies’ plans with spells, then summons stealthy mages and shadowy undead to deliver the killing blows." I haven't picked up the latest digital version of Magic yet, but that sounds like a bunch of Counter Spells and Cancels, coupled with creatures that don't stay dead. That's a rage inducing combination for your opponents.

The "Mana Mastery" deck is composed of all five colors: "A pentacolor array of spells will help you keep the battlefield clear while you set the stage for towering, indomitable creatures." Now that sounds like a deck full of giant creatures. Whenever I play with those kinds of decks I usually find myself wishing for just one more mountain while my enemy picks me apart with Drudge Skeletons and Plague Rats. I'm starting to remember why I stopped playing. For those of you who are still into it, carry on.