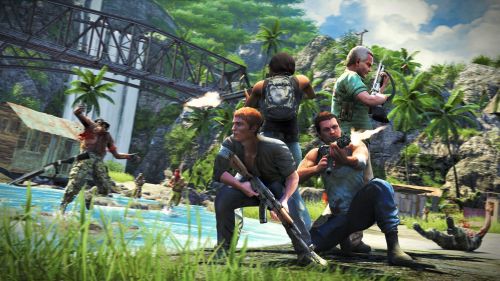 After we ran our Far Cry 3 preview from E3, I noted the Co-Optimus community had some very good questions. Game developers don't hand out business cards at E3 for nothing! I passed along a few questions to Massive's Ditte Deenfeldt, the designer of Far Cry 3's co-op campaign.

Q: Will Far Cry 3 support split screen on the PC?

Q: Will there be a map editor for the co-op maps, or are there plans to have map editing or DLC in the future?

A: The map editor will be for multiplayer maps only, unfortunately. I’d have loved to be able to do co-op maps in the editor, but not this time around.

Q: Will co-op include a rank system? Is it narrative-based, or will characters earn XP or cash for upgrades or unlocks?

A: We have a completely unified profile with the multiplayer gamemode so all weapons, attachments, skills, battlecries and other goodies you unlock can be unlocked playing co-op as well as multiplayer. That means that if you are mainly a co-op player you’ll still get progression, but you’ll also not start from zero if you do decide to play adversarial multiplayer. In co-op you gain a shared team-score playing through the map, but the individual final XP score will be the teamscore the XP you gained from the co-op competition sequence.

There you have it. Far Cry 3's co-op campaign is shaping up to be a fully realized feature of game which will keep co-op players coming back for more. We also have a new trailer for the co-op campaign below.

Warning: The video features adult language, violence, and liberal use of accents.

Be sure to read our E3 2012 Far Cry 3 hands-on preview, complete with a video interview with Ditte Deenfeldt and cooperative gameplay footage.