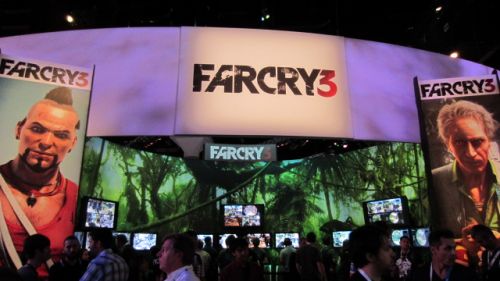 I was wandering around Ubisoft's crowded E3 booth, trying to figure out how I was going to cover Far Cry 3's recently announced co-op mode. I was approached by a nice young woman who asked me if I had played the game. I told her I hadn't, and before I could bat my eyelashes she said she recognized the "Co-Optimus" name on my badge. She then informed me that she designed the co-op mode in Far Cry 3 and would very much like for me to play it.

Holy crap! I was talking to Ditte Deenfeldt, the game designer who spent the last two and half years secretly developing Far Cry 3's four player local, online, and combo co-op mode. I asked her for a quick interview and she happily obliged:

But wait! There's more! I had a chance to play through a mission with three other players. I'll say this up front: this is no "horde" mode. There's a narrative, which is set a few months before the single player game, and four new individual characters. There aren't specific skill classes, allowing players to use several weapon loadouts to accommodate different play styles. I preferred a shotgun/flamethrower combination and dabbled with a submachine gun.

We fought back throngs of enemies, including fast, vicious enemies who could kill us with one blow, a heavy soldier armed with a machine gun and body armor, and frick'n guard dogs! There were also multiple objectives to complete throughout each mission. In the mission I played we had to cover each other while repairing a train so we could dislodge it from a tunnel. Later we took turns placing explosives on a bridge, the whole time fighting back an army of soldiers.

Far Cry 3 has another interesting feature in the co-op missions. While the four of us were crossing a bridge we got word over the radio that we needed to provide cover fire to the village below. Armed with bolt-action sniper rifles, the four of us engaged in a little friendly competition. We were scored on our performance, and then continued the mission.

The only downside to the co-op missions is that gameplay is limited to six maps as opposed to an open world area. Ditte mentioned that each map will take 45 minutes to an hour to complete, depending on the difficulty setting. The dynamic AI and co-op challenges should keep you coming back for more.